2018: The Year We Pass the Florida Competitive Workforce Act

Today, the 2018 Florida legislative session begins, and before them are two pieces of legislation that, if passed, would provide an economic boost to the state, and protect all hardworking Floridians from discrimination.

HB 337/SB 66, known as the Florida Competitive Workforce Act (FCWA), goes before the Florida Legislature for a tenth time this year. Last year, the bill earned co-sponsorship from 44% of legislators, but failed to get a hearing in the House or Senate. After 10 years of legislative inaction, combined with the high level of support among lawmakers, it is time for the bill to be considered before the legislature. 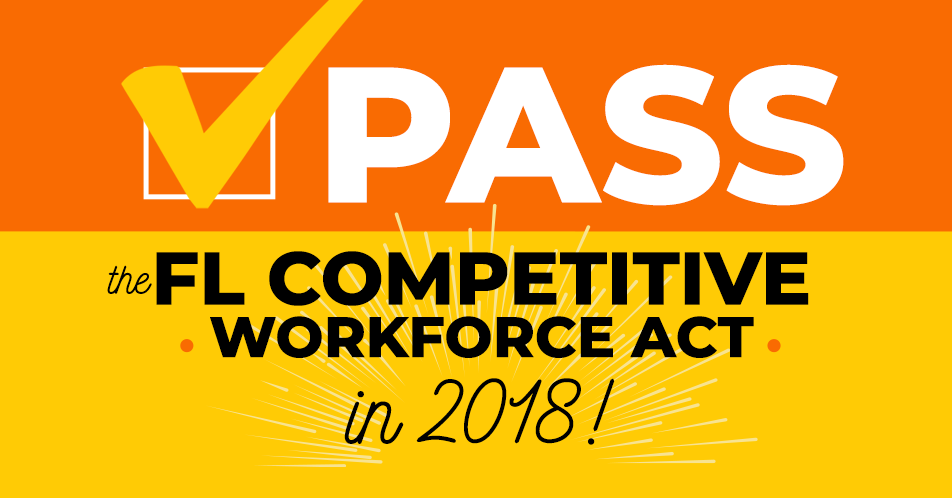 Passage of the FCWA would drastically improve the economy throughout the state, and send a strong message that Floridians value inclusion, equality, and diversity. Some of the state’s largest employers are championing the bill, including CSX, and Marriott because they know it’s crucial to moving FL’s economy forward.

The law would also help attract new business and investment, which is particularly important in 2018 as Amazon seeks a home for its second world headquarters. Several cities in the state, including Tampa, have made bids for the company; wherever HQ2 ends up, the host city will gain an initial investment of $5 billion, and over 50,000 high-paying jobs. But business leaders worry that without a modernized, statewide nondiscrimination law, Florida will fall behind.

But it’s not just big business calling for this important legislation: New polling from the Small Business Majority shows that  73% of small business owners in Florida were in support of a federal law protecting LGBTQ people from discrimination in public accommodations, and nearly 7 in 10 responded that they would support a similar state law.

In the lead up to 2018 legislative session, businesses have already sent a clear signal to lawmakers that the Competitive Workforce Act must be a priority as lawmakers return to Tallahassee.

In late 2017, our coalition sent a letter to House Speaker Richard Corcoran and Senate President Joe Negron urging them to bring the FCWA to the floor for a vote. The letter was signed by 10 Fortune 500 companies, more than 450 small businesses, and 30 major employers; included among them are AT&T, Walt Disney World, and Darden Restaurants. The letter stated, in part:

“The coalition believes the Florida Competitive Workforce Act will make the State of Florida more competitive in the national and global marketplace in much the same way anti-discrimination policies have benefited employers.”

Modernizing Florida’s nondiscrimination law is good business — over the next ten years, work output could boost the state’s economy by as much as $5.46 billion, and create over 30,000 new jobs. That’s why case is clear: the Florida Competitive Workforce Act must be passed in 2018 to bring an economic boon to the state, attract the best and brightest talents and ensure Florida can compete in the growing global economy.