Before launching his award-winning food startup two years ago, Austin Allan worked at Wells Fargo; it was there that he saw what a difference it makes when you protect LGBT employees from discrimination at work. So, now that he’s running a business of his own, he has made sure that his company is a place where discrimination — of any kind — is not tolerated. 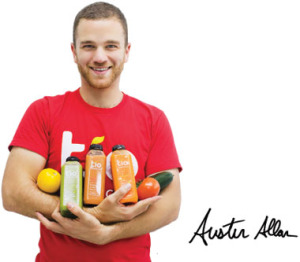 “As a gay man,” Austin said, “it’s incredibly important to me that all of my employees be able to bring their full self to work every day. Not only is that the right way to treat people, but it makes us all happier and more productive.”

Austin knows that not all employees are treated with the same respect and fairness he’s fostered at his business, that’s why he thinks it is critical that Florida add statewide protections for LGBT people to existing non-discrimination laws.

Because Florida lacks these protections, not all Florida workers have that peace of mind Austin fosters. And this leaves businesses in a pinch, since it’s clear that many of today’s workers want to work in communities that don’t discriminate. This is especially true for millennials, who overwhelmingly support employment nondiscrimination laws and who make up a growing share of the nation’s workforce.

“I want to live in a state where everyone has that security, to be their full, true self,” Austin said.

Austin wants to make sure the employees he already has feel safe and welcome, but he also wants to be able to recruit top talent from around the country or the world. That’s where the Florida Competitive Workforce Act comes in. The FCWA would amend Florida’s civil rights laws to prohibit discrimination based on sexual orientation and gender identity or expression in employment, housing and public accommodation.

“As my company continues to grow, I want anyone to be able to move here and know that Florida is a place where all people are respected. If we don’t update these laws, that’s something that could definitely hold someone back from moving here, and doing business here,” said Austin.

Austin said that Florida has been an amazing place to do business, and since he owns his, he doesn’t have to worry about being fired for being who he is. But, he knows not everyone is so fortunate.

“Everybody needs a job — that’s why we need these protections. I don’t want to see anyone in Florida get fired for who they are or who they love, that’s just not right.”

Thankfully, lawmakers are taking action. Earlier this year, the state legislature held its first-ever hearing on the FCWA. And in October, State Senator Anitere Flores (R-Miami) — who co-sponsored the FCWA during the last legislative session — indicated she would do the same in 2017.

“I know people in Florida are fair — that’s always been my experience living and doing business here – so I am hopeful that we can pass this law; it’s a simple, quick way to make life better for lots of people all over our state,” Austin said.

To get involved in the campaign to pass the Competitive Workforce Act, click here.