The Sunshine State got an economic boost today when the Atlantic Coast Conference announced that it will bring its football championship game to Orlando. The game will kickoff Saturday, December 3 at Camping World Stadium and could rake in $30 million revenue, according to last year’s figures. 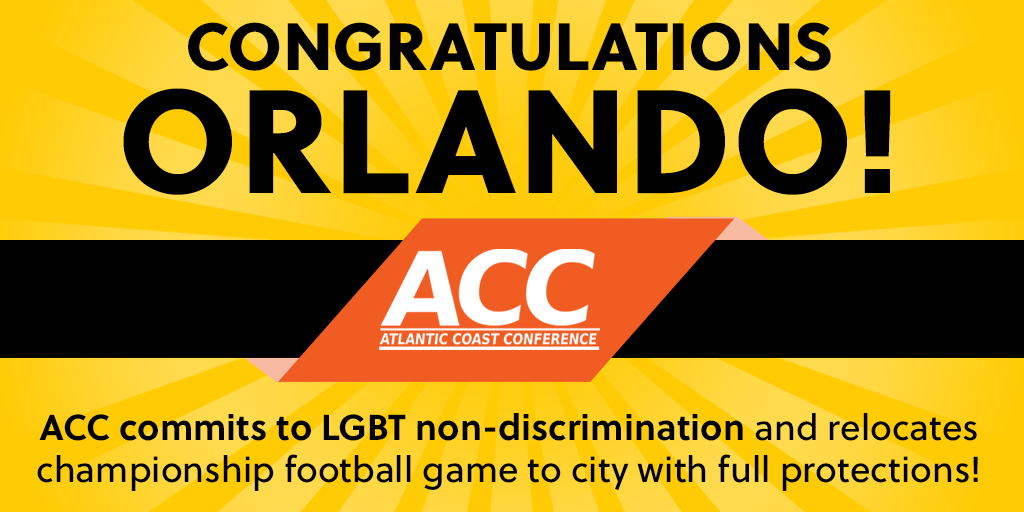 The ACC announced earlier this month that it would pull all neutral-site championships out of North Carolina over the state’s discriminatory HB 2 law, which gives license to discriminate against transgender people and prohibits them from using public restrooms that match their gender identity. It also overturns existing local LGBT non-discrimination laws, including one in Charlotte, where the ACC’s football championship game was originally scheduled to take place.

In total, some estimates show that HB 2 has cost North Carolina up to $450 million in cancelled sporting and entertainment events, frozen investment plans, and diverted tourism and convention revenue. Just this week, 53 major investors representing $2.1 trillion in total assets penned an open letter to the NC legislature calling for the repeal of anti-transgender HB 2.

The ACC’s decision followed on the heels of the National Collegiate Athletic Association’s announcement that it would pull 7 championships out of North Carolina because state-sanctioned LGBT discrimination under HB 2 did not align with the organization’s “commitment to fairness and inclusion.”

A new rule set down by the NCAA in the wake of the controversy over HB2 requires host sites to submit explicit plans for how they will protect participants and spectators from discrimination.  The ACC, as an NCAA conference, is bound by these same non-discrimination rules.

Though Florida does not have explicit statewide protections for LGBT people, the city of Orlando has LGBT-inclusive non-discrimination laws that meet the NCAA standards.

Today’s announcement is a huge win for Orlando. But it highlights a broader trend: Businesses are investing in cities and states with LGBT protections. If Florida truly wants to compete in an increasingly global marketplace, state lawmakers should make LGBT non-discrimination the law of the land.