A bipartisan coalition of lawmakers gathered at the Florida Capitol on January 18 to stand in support of HB 347 / SB 66, known as the Florida Competitive Workforce Act (FCWA), which would modernize the 1992 Florida Civil Rights Act to include nondiscrimination protections for sexual orientation and gender identity —an important step in retaining and attracting business and talent to the Sunshine State. 62 legislators, 56 percent of whom are freshmen members, represent the strongest number of early signers of the Competitive Workforce Act at a mere nine days into the 2018 Session, and comprise nearly 40% of the entire legislature.

The Florida Competitive Workforce Act has been introduced and now as the 2018 session gets underway with unprecedented momentum, both Republicans and Democrats are calling for swift passage of this important pro-business bill. 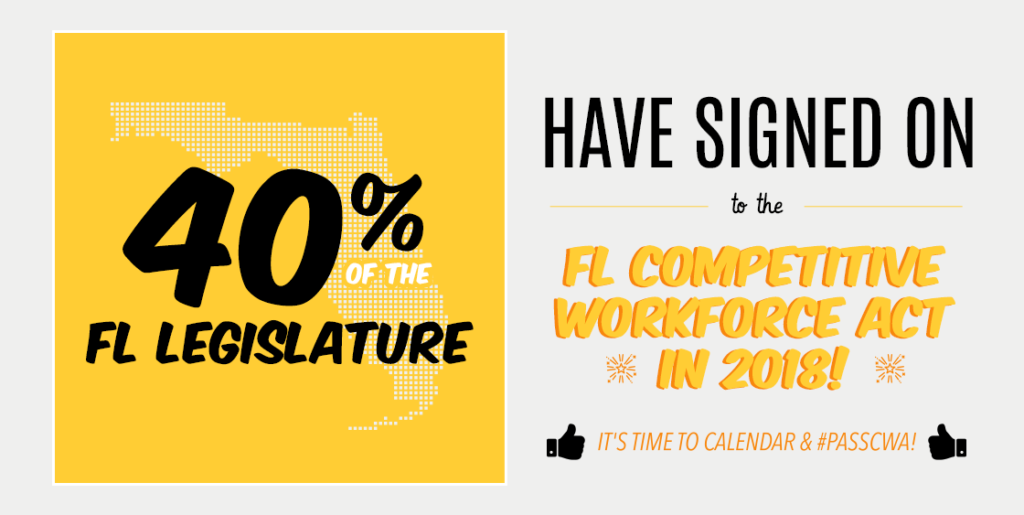 A lead House sponsor of the bill, Ben Diamond, commented:

“I am proud to be joined by my colleagues on both sides of the aisle in support of this common sense reform effort. In addition to modernizing our civil rights laws, this bill will help Florida attract and retain top talent and it will make us more competitive in the global economy.”

“The strong bipartisan support of the Florida Competitive Workforce Act shows that the issue is not only good public policy, but it is the right thing to do. It sends a strong message to businesses who are looking to expand in, or relocate to Florida, that their employees will be afforded the same basic rights.”

“This is a good bill for a just cause,” stated Republican Rep. Chuck Clemons, a co-sponsor of the legislation. “When even one person is discriminated against because they are LGBT, Florida’s strong economic standing and welcoming tourist environment is weakened.”

Rep. @BenDiamondFL—one of the lead co-sponsors of the FL Competitive Workforce Act—says he’s proud to stand with a solid, bipartisan coalition to push a bill that will benefit the FL economy for years to come. #FLLeg #FlaPol pic.twitter.com/e6rD9uPDLU

Florida Competes, a coalition of over 450 businesses large and small, has been working closely with lawmakers to introduce and pass the bill for over a year. On October 17 of last year, Florida Competes sent a letter to House Speaker Richard Corcoran and Senate President Joe Negron asking the FCWA be heard during the 2018 Legislative Session. During the 2017 session, the FCWA received unprecedented bipartisan support, with 44% of all legislators, or 70 members, signing on to the bill—yet neither chamber heard the measure.

“Carlton Fields is a staunch supporter of the Florida Competes coalition, which is comprised of both small and large Florida businesses who recognize the importance of protecting LGBT individuals from discrimination,” said attorney Marti Chumbler. “The Florida Competitive Workforce Act is legislation that must be heard this session, to ensure these protections are in place which would strengthen our state’s economy and communities.”

While the state has failed to update Florida’s nondiscrimination law, updated Human Rights Ordinances (HROs) have been passed in 12 counties and 30 municipalities throughout the state, most recently in Jacksonville. But this process creates a patchwork of protections where employees and their families are still subject to discrimination if they live in a neighboring city or county from their workplace without a local HRO.

To view all members of the Florida Competes coalition, click here.