As of today, House and Senate versions of the bill have netted a combined 36 co-sponsors. The FCWA was sponsored by Sen. Jeff Clemens (D-Lake Worth) and Reps. Ben Diamond (D-St. Petersburg) and Rene Plasencia (R-Titusville) last month. 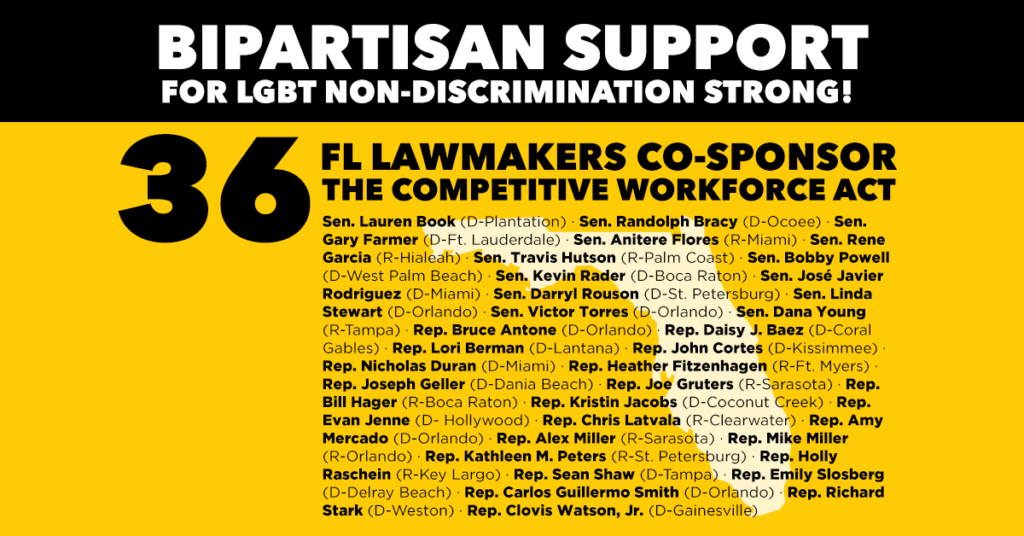 The FCWA (SB 666/HB 623) would update the Florida Civil Rights Act to include protections from discrimination for LGBT residents, visitors and workers.

Members of Florida Competes, including 10 Fortune 500 companies, 30 major corporations and more than 450 small businesses, have been pushing hard for these updates, which are critically necessary for maintaining Florida’s reputation as one of the fastest-growing economies in the nation—something the FCWA’s GOP endorser’s emphasized when discussing their support for the legislation.

Sen. Dana Young (R-Tampa), said she was concerned that without these non-discrimination protections, Florida’s ability to attract workers would suffer.

“As we continue to grow and diversify our Florida economy, we need to use every tool in our toolbox to ensure that we attract and retain the best and brightest workforce. These common sense anti-discrimination measures position Florida to effectively compete on the national and global stage.”

Other GOP representatives echoed these concerns, especially in the context of workplace discrimination, which is currently not prohibited by state law. Rep. Heather Fitzenhagen, (R-Ft. Myers), noted that such discrimination could have dire economic consequences.

“Workplace discrimination is economically damaging to a company, and ultimately to the state. A culture of diversity and inclusion improves productivity and promotes employee retention. We need to support Florida’s workforce by ensuring everyone enjoys equal opportunity employment.”

And Rep. Joe Gruters (R-Sarasota), said that statewide non-discrimination protections are frequently something companies take into account when deciding to expand or relocate.

“The strong bipartisan support of the Florida Competitive Workforce Act shows that the issue is simply good public policy. It sends a strong message to businesses who are looking to expand in, or relocate to Florida, that their employees will be afforded the same basic rights.”

In addition to growing appetite at the State House to pass LGBT non-discrimination under the FCWA—there is growing momentum at the municipal level for comprehensive and inclusive protections.

In February, the Jacksonville city council passed a Human Rights Ordinance (HRO) that protects its residents and workers from discrimination based on their sexual orientation and gender identity. That means that 60% of Floridians are now covered by local HROs.

The FCWA, however, would add “sexual orientation and gender identity” to uniform statewide law to ensure 100% of Floridians are protected and streamline the process for addressing workplace discrimination.

The bipartisan support for the FCWA on display today shows that political momentum for the legislation is heating up—and so is support from businesses. If you’re a Florida business owner and you’d like to join the Florida Competes coalition to advocate on behalf of the Florida Competitive Workforce Act, click here to sign our business pledge.