For A Lakeland Small Business, Equality Is Key to Success

In business for 27 years, and a staple of downtown Lakeland for 24, Brooke Pottery is another Florida small business supporting the Florida Competitive Workforce Act (FCWA).

The store has 10 employees and boasts an array of American-made artist work from pottery, to jewelry, to other gifts.

We talked with Margaret Stephens, the store’s co-owner, about why her business supports protecting all Floridians from discrimination. For her, treating people equally was just how she was raised. But she also says equality is simply a good business practice.

“For me, it goes back to my first career, as a teacher,” Margaret said. “As a teacher, you teach all of the children. You meet kids from all backgrounds, and so I learned very quickly not to make any judgments and to do my best to teach every student in my classroom,” she said. 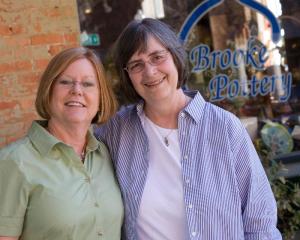 Even before she was a teacher, Margaret said, it was a part of her upbringing to be kind to all people.

“It goes all the way back to something my father taught me as a child. He believed, and he taught us, that people are people. It doesn’t matter someone’s skin color, or sexual orientation, or anything else. Inside, we’re all just people, and we should all be treated equally,” she said.

In part because she has always made treating people fairly a priority, Margaret was surprised to learn that gay and transgender Floridians weren’t already legally protected from discrimination—something the FCWA would fix.

“I though it was already illegal,” Margaret said, “until I really looked into it and read some more about the work that Florida Competes was doing, I thought the law already protected people. But, it doesn’t, and we need to change that.”

Some lawmakers are working on it. This spring—for the first time in Florida’s history—the FCWA received real attention at the Statehouse. It’s been introduced every year for 10 years, and this year was the first time it received a hearing.

State Senator Anitere Flores (R-Miami) has already indicated she will co-sponsor the FCWA during the upcoming legislative session. The FCWA would amend Florida’s civil rights laws to prohibit discrimination based on sexual orientation and gender identity or expression in employment, housing and public accommodations.

Despite this lack of legal protections, Margaret and her staff are working hard to build an environment where all people feel comfortable. She says a culture of inclusiveness helps her business retain customers and employees.

“We have customers from all backgrounds. We just want everyone to feel at home when they come into our store,” said Margaret.

When she’s looking for new employees, it’s all about whether people are hardworking and good with customers.

“Helpful, cheerful, and welcoming to anyone who might walk in the door,” she said.

We’re grateful for the support of small business owners like Margaret! Thanks to advocates like her, Florida lawmakers are finally getting serious about passing the FCWA. For more information on Brooke Pottery, visit: http://brookepottery.com/