Last week, Florida Competes coalition members met with lawmakers to discuss how important LGBT-inclusive non-discrimination protections had been to their companies and the positive impact such protections could have on Florida’s economy. 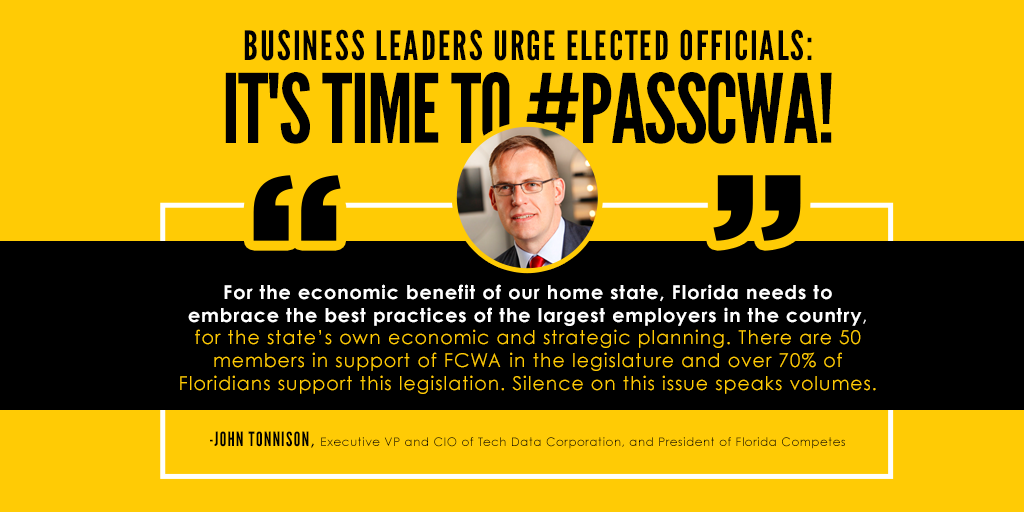 John Tonnison, Executive Vice President and CIO of Tech Data Corporation and President of Florida Competes, coordinated the meeting between leaders of several of Florida’s largest companies and lawmakers, who are currently considering the Florida Competitive Workforce Act (FCWA), legislation that would protect LGBT Floridians from discrimination in employment, housing and public accommodations.

The purpose of the meeting, according to Tonnison, was to drive home how important these reforms are to keep Florida’s economy among the most thriving in the nation.

“For the economic benefit of our home state, Florida needs to embrace the best practices of the largest employers in the country, for the state’s own economic and strategic planning. Time after time we see the most successful and innovative companies enacting anti-discrimination policies to respect and protect their employees; all of their employees. It is overdue for our legislative process to catch up with this kind of respectful and inclusive thinking, and hear the bill. Silence on this issue speaks volumes.”

Tonnison as well as executives from Carlton-Fields, CSX, and Florida Blue spoke at length to lawmakers about the positive effects non-discrimination protections have had on their companies. Currently, 82% of the nation’s largest companies have adopted comprehensive non-discrimination policies that include sexual orientation and gender identity.

By and large, the positive effects of these policies flow from the inclusive work environment they promote. That, in turn, improves recruitment, productivity and retention of top employees. If these effects were applied across the state, Florida could add more than $5 billion to its economy and 35,759 jobs over the next 10 years.

Coalition members also spent time debunking some of the more pernicious myths that are being circulated by opponents of the FCWA, the main one being that these protections would increase frivolous lawsuits.

There is absolutely no evidence for that claim, either in Florida or in the 18 states across the nation that have such protections.

In fact, a 2009 study from the Government Accountability Office (GAO) found “relatively few employment discrimination complaints based on sexual orientation and gender identity” based on states with non-discrimination laws in place at that time.” Another study in 2013 again found no uptick in lawsuits. And the percentage of discrimination complaints in states that have fully inclusive protections are already low, ranging from 1.6 percent to 5.4 percent in 2007—2012.

The same pattern holds for Florida municipalities that have their own non-discrimination laws. That currently includes 12 counties and 30 cities and towns throughout the state, covering 60% of Floridians.

Broward County—home to the state’s largest LGBT community—is a case in point. Over the last 20 years, it has received limited complaints based on sexual orientation or gender identity, representing a mere 2.6% of the total complaints filed.

Right now, a bipartisan group of 50 lawmakers and more than 70% of Floridians support the FCWA, and it’s time for elected leadership to get on board and give this legislation the committee hearing it deserves.

The Florida Competes coalition, which includes 10 Fortune 500 companies—like AT&T, CSX, Darden Restaurants, and Marriott—and more than 450 local businesses on board won’t stop making the case to lawmakers until they do.

If you’re a Florida business owner who’s interested in joining the push for the FCWA, click here to learn more and join the Florida Competes coalition.