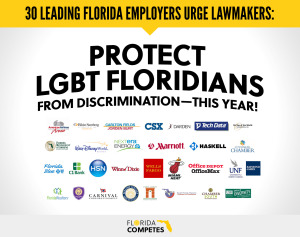 A coalition of some of the state’s top employers—including Wells Fargo, Marriott and Disney—called the Florida Businesses for a Competitive Workforce, sent a letter today to Governor Rick Scott, Senate President Andy Gardiner and House Speaker Steve Crisafulli asking them to hear House Bill 33 and Senate Bill 156, and to support the Competitive Workforce Act. The Act would eliminate discrimination against gay and transgender Floridians in the workplace, in housing and in public accommodations in order to create a more competitive, welcoming environment.

The letter begins thanking the Florida leaders for making Florida such a pro-business and pro-tourism state, but continues by stating, “However, the Florida Businesses for a Competitive Workforce coalition strongly urges state lawmakers to reject discrimination and take up legislation that will make the state even more competitive in its ability to attract employers, the talent they need to be successful, and visitors.

“The Competitive Workforce Act is bipartisan legislation that promotes fairness and modernizes state law by banning anti-gay and gender-based discrimination. While it is illegal to discriminate in employment, housing and public accommodations based on race, color, religion, sex, national origin, age, handicap or marital status, state law does not protect individuals from discrimination based on sexual orientation and gender identification.”

The letter references several statistics in order to prove that leaving Florida’s policies as they are is hurting its chances of attracting new employers and jobs.

“In a March 2015 study, several top executives from nationally recognized Florida-based businesses were interviewed, and 75 percent of the participants noted plans to expand in the coming 36 months. Several reported they made relocation or expansion decisions in favor of a location with a public policy climate that promoted diversity and non-discrimination for the LGBT community. The same study reported that discrimination is costing Florida businesses more than $360 million each year in lost productivity and employee turnover.

“Twenty-eight (28) counties and municipalities, representing more than 10 million Floridians, currently have local protections in place for LGBT people, however, 46 percent of the state’s population remains vulnerable to discrimination. In addition, the lack of a statewide law in Florida leaves inconsistencies for employers, who must adhere to differing rules and regulations when expanding or relocating.”

The letter states that members of the coalition all believe the Competitive Workforce Act will make Florida more competitive in the national and global marketplace in the same way that companies have benefitted from adopting non-discrimination policies. The coalition includes 30 major employers and over 300 local businesses in Florida, further proving the urgency of the legislation.

“More than half of our state population is protected by local policies, but we believe it is time to update our state laws to ensure these basic protections exist statewide. Florida cannot wait another day and risk the chance of becoming the next Indiana.”

On March 26, Indiana Governor Mike Pence signed into law the state’s Religious Freedom Restoration Act (RFRA), which allowed businesses and individuals to discriminate against gay and transgender people under the guise of religion. Major companies and organizations cried out in retaliation against the bill, some threatening to leave the state if action was not made. In response, the legislature passed a “fix” to the bill to ensure that law could not undermine existing non-discrimination ordinances in 12 Indiana municipalities.

After Indiana was placed under the nation’s limelight, it’s no wonder that the Florida Businesses for a Competitive Workforce does not want Florida to fall to a similar fate.

Join the Florida Businesses for a Competitive Workforce in urging lawmakers to hear House Bill 33 and Senate Bill 156, so that all Floridians can live without fear of discrimination once and for all.