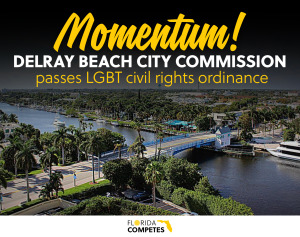 More local momentum across Florida, as Delray Beach has become the latest municipality across the state to pass an LGBT non-discrimination ordinance!

We’re thankful to members of the City Commission who stood with the strong majority of Floridians in supporting critical non-discrimination protections. Not only was the passage of this ordinance the right thing to do—but it sends a clear signal that Delray Beach is a community that is open to all. We’re confident that modernizing the city’s non-discrimination law will not only benefit LGBT residents and visitors, but it will strengthen the local economy.

And while we’re thrilled to see local momentum building in communities across the state, the fact remains that under Florida law, it’s still legal to discriminate against LGBT people because of who they are. No hardworking Floridian  should have to fear discrimination in the workplace or where they live. That’s why it’s time for Florida lawmakers to pass the Competitive Workforce Act to help attract and retain top talent for years to come—and at long last ensure statewide protections for all gay and transgender people who call the Sunshine State home.