Members of the Florida Competes coalition know that discrimination is bad for the Sunshine State and more specifically, bad for the economy. Now, we have hard facts to show that the majority of Florida small businesses feel the same way. 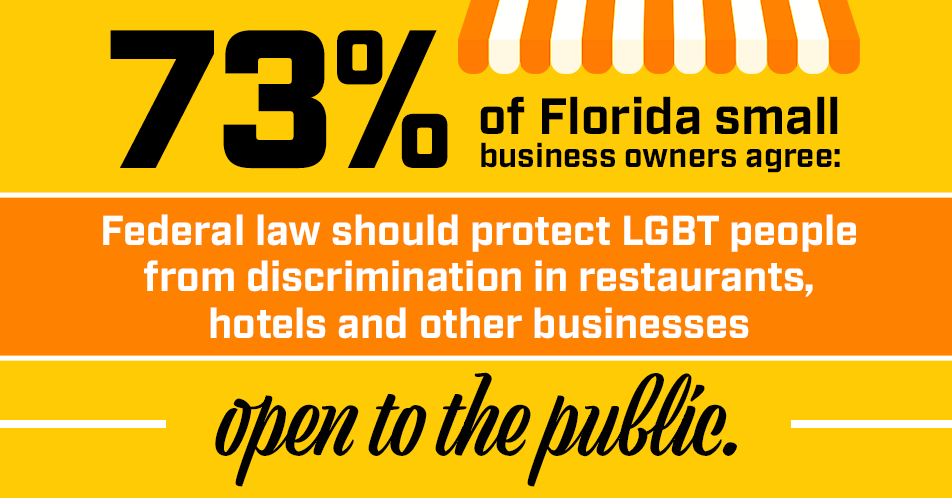 On November 16, Small Business Majority released a report showing unequivocally that small businesses in Florida reject discrimination against LGBT people, and believe that there should be laws in place to prevent as much. Polling data was taken from October 4 to October 23, and included Florida as well as North Carolina, Ohio, Georgia, and Michigan.

The polling shows strong support for legislation that would prevent discrimination against LGBT people. Nearly three quarters (73%) would support a federal law protecting against discrimination in public accommodations, places like restaurants, hotels and other businesses open to the public.

When it comes to anti-LGBT employment discrimination specifically, 63% of small businesses would support a federal law preventing it, while 69% would support a state law. 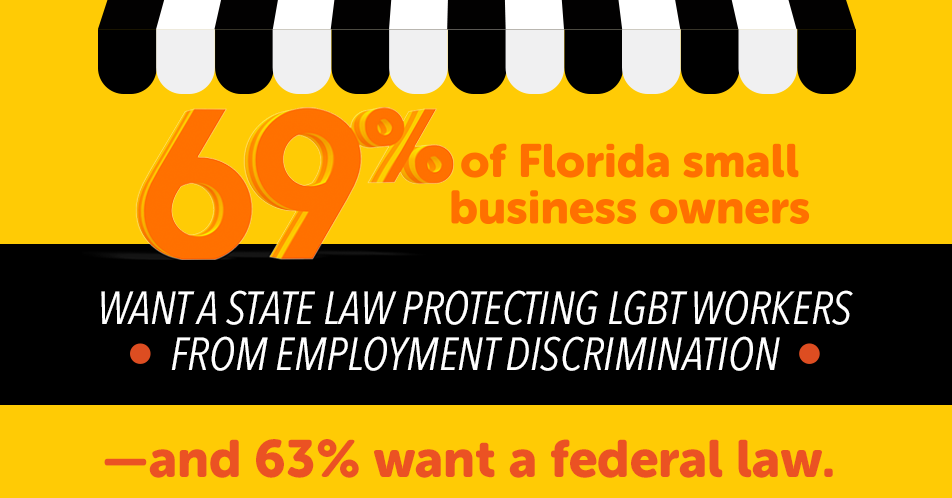 Florida’s small businesses were also wary of discriminatory legislation’s effect on their bottom line. When asked what effect enacting a law allowing businesses to discriminate against LGBT people would have on the state’s business climate, 63% of respondents said it would be negative.

More than half of Florida entrepreneurs (53%) believe that a business owner should not be able to discriminate against LGBT people by claiming that it violates their right to free speech. A further 60% of entrepreneurs responded that business owners should not be able to claim an exemption from non-discrimination laws based on freedom of artistic expression.

On the flip side, many small business owners said proactive legislation would be good for business. Fifty one percent of respondents believe that laws preventing LGBT discrimination would help improve their bottom line by attracting the best and brightest in the employment pool, regardless of sexual orientation or gender identity. Furthermore, 53% believe that non-discrimination laws would help both attract and retain employees.

“At The Loop Pizza Grill, our employees are recruited based on their merits, and retained and promoted based on their job performance. We believe in order to hire the best employees, we must create an open, diverse work environment for everyone to grow. It’s not just good business sense, it’s the right thing to do.” —Mike Schneider, co-founder of The Loop Pizza Grill in Jacksonville

Mike Schneider, co-founder of The Loop Pizza Grill in Jacksonville, is one of those local business owners who supports protecting LGBT people from discrimination, because it’s the right thing to do and it’s good for his bottom line.

“At The Loop Pizza Grill, our employees are recruited based on their merits, and retained and promoted based on their job performance,” he says. “We believe in order to hire the best employees, we must create an open, diverse work environment for everyone to grow. It’s not just good business sense, it’s the right thing to do.”

The results are clear: a majority of small businesses and entrepreneurs believe that discrimination a people is bad for the bottom line, and that business owners should not have the right to turn people away because of who they are. This polling only strengthens our coalition’s belief that modernizing Florida’s non-discrimination law will strengthen our economy across the state—which is why businesses large and small are in overwhelming support.

In 2018, our coalition of 450+ businesses will harness the results of these findings to bolster our case to lawmakers that now is the time to  pass the Florida Competitive Workforce Act, which will help businesses be able to attract the best and brightest talent to Florida and ensure that our welcome mat is out for everyone.

View the full list of Florida Competes members, and if you believe protecting LGBT people from discrimination helps Florida compete, join our coalition.