Florida has doubled the number of cities receiving perfect 100% scores on LGBT-inclusivity, according to the annual Municipal Equality Index (MEI) report, released today. 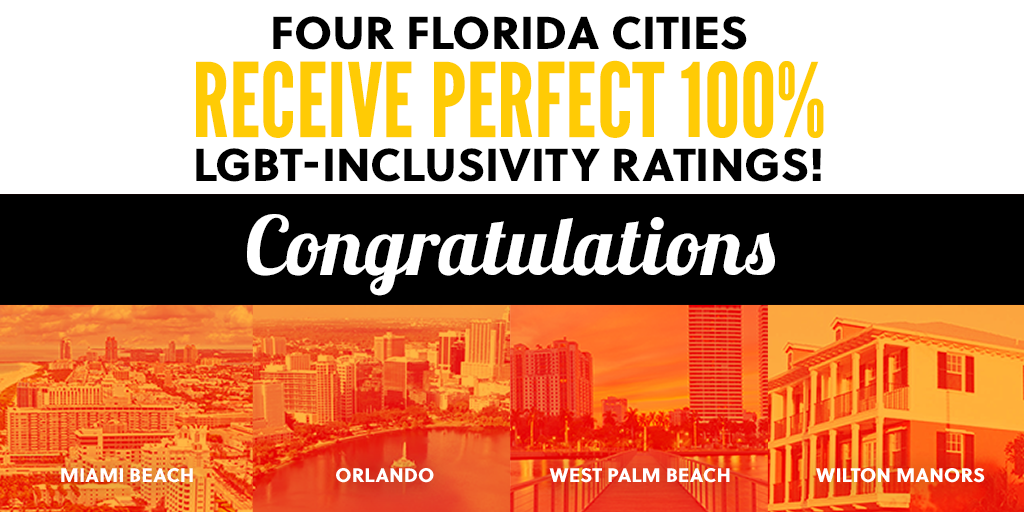 Both Miami Beach and West Palm Beach self-submitted scorecards this year to ensure they were counted among the cities known for being LGBT-friendly. Orlando and Wilton Manors have been leading the state with perfect 100% ratings for three consecutive years. Recently, Orlando received special recognition as an open and welcoming city to live and work when it was awarded the Atlantic Coast Conference’s championship football game.

For five years, Charlotte, NC has been the site of the cash cow game. But this year, the ACC pulled the championship from the Tarheel State—along with seven other neutral site tournament games—as part of a massive boycott against the state’s discriminatory, anti-transgender HB 2 law. The ACC’s decision followed on the heels of announcements from the NBA and the NCAA that they would be relocating major championship games in opposition to state-sanctioned discrimination under HB 2.

Orlando’s consistent 100% LGBT-inclusivity rating likely played a major part in attracting the ACC’s championship bid. The game could give the local economy a steep $30 million boost, according to estimates from last year’s game.

Three other Florida cities have also made major strides on LGBT equality in the past year. Gainesville is on the fast-track to a perfect 100% score in 2017, with a near 30-point leap from 70 to 98 since last year’s report. And Miami Shores is closing in on full LGBT inclusivity, with its score creeping into the 90s over the past 12 months.

Meanwhile, Jacksonville could quickly become a frontrunner on LGBT non-discrimination if it continues to progress at current rates. In the past year, it doubled its MEI rating.