Florida mayors are taking a stand for their communities and the economic prosperity of our state as part of a new coalition aimed at combating LGBT discrimination and promoting comprehensive non-discrimination protections. 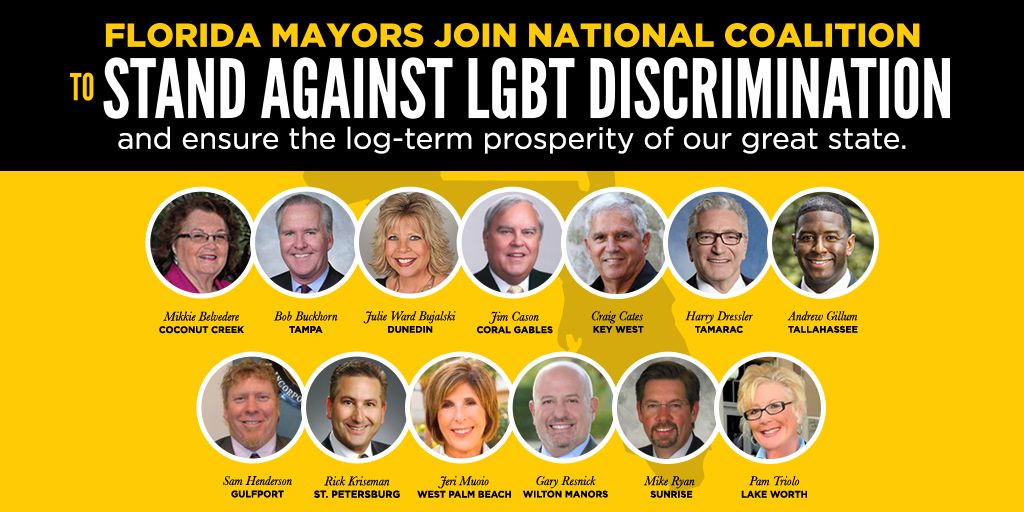 Mayors Against LGBT Discrimination is a bipartisan coalition of 175 mayors from 42 states who are banding together to push for inclusive non-discrimination protections, including for lesbian, gay, bisexual and transgender individuals.

The coalition’s Florida contingent is second-most represented among the states, after California, with 13 mayors. They include:

The group was formed to take advantage of the role mayors can play in protecting LGBT people from discrimination. Mayors have their eyes and ears on the ground and in the communities that they represent. They have first-hand knowledge that LGBT-inclusive non-discrimination protections are critical to ensuring the fair and equal treatment of all of their constituents—and for attracting top businesses to their cities.

Right now, city officials in Jacksonville are considering a local non-discrimination ordinance which would make it the 7th Florida municipality to pass LGBT-inclusive protections. In fact, a majority of Floridians are now protected from LGBT discrimination because of local HROs.

Expanding protections at the local level coupled with concerted efforts on the part of mayors to put an end to discrimination signals a sea change in public and political opinion about the need for non-discrimination.  Many elected officials are beginning to understand what businesses have long known—LGBT-inclusive non-discrimination protections aren’t just the right thing to do, they’re critical to ensuring cities stay competitive economically.

While local protections are a step in the right direction, ultimately, a statewide law is needed to attract business and ensure continuity of protections outside of Florida’s major cities. That’s why more than 450 businesses have joined Florida Competes, a coalition that advocates for updating Florida state laws to ensure that LGBT people can’t be fired or harassed on the job, denied housing, refused service in public places. And now mayors can help move the conversation in the right direction, and in the meantime set an example for state lawmakers.

Click here to see the list of Florida Mayors currently signed on to the Mayors Against LGBT Discrimination coalition.

If you don’t see yours, you can urge them to join by sending them this link: http://action.mayorslgbt.org/page/s/mayors-against-lgbt-discrimination