Many of our nation’s largest employers do business in Florida, and they all agree: It’s easier for them to grow their companies in the Sunshine State when everyone is protected from discrimination, regardless of their sexual orientation or gender identity. 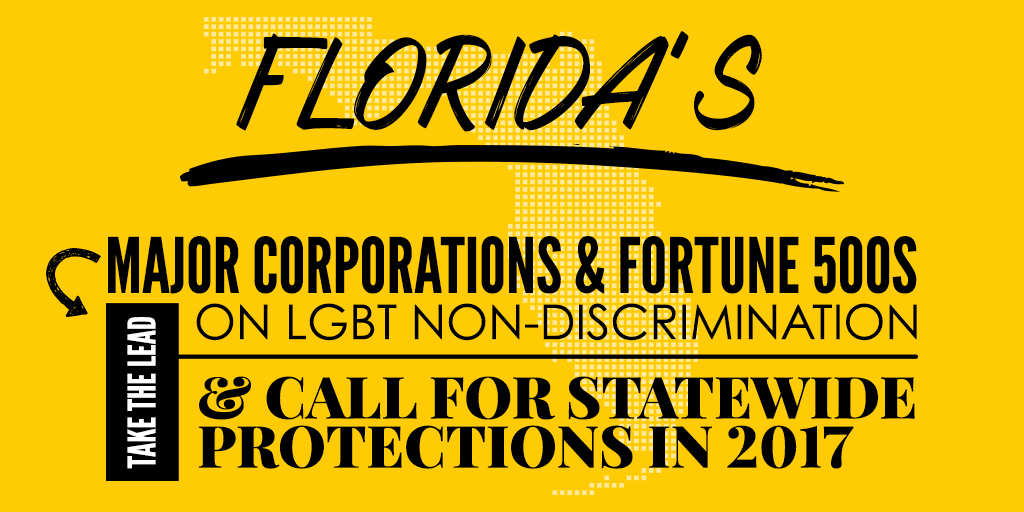 That’s why more than 450 businesses have joined Florida Competes—formerly known as Florida Businesses for a Competitive Workforce—to advocate for updating Florida state laws to ensure that LGBT people can’t be fired or harassed on the job, denied housing, refused service in public places—or discriminated against anywhere in our great state because of who they are.

Clearwater-based Tech Data Corp has LGBT non-discrimination protections written into their company rules. In fact, this year Tech Data received a perfect score on the Human Rights Campaign’s Corporate Equality Index. It’s also been ranked as one of the “Best Places to Work for LGBT Equality.” John Tonnison, the company’s executive vice president and CIO, says this inclusive corporate culture has been critical to helping the company grow and become one of the world’s largest distributors of technology products. According to him, all Florida companies, and by extension the state economy, could benefit from seeing similar policies implemented at the state level. He says non-discrimination is key to maintaining global relevancy.

“Protecting gay and transgender Floridians from discrimination isn’t just morally the right thing to do, it’s prerequisite if our state wants to be relevant and economically competitive in the global market. This year, the legislature has the opportunity to send a signal that Florida is open for business—to everyone. Florida lawmakers should not miss this critical opportunity to help our economy and enhance our global credibility.”

According to Bob O’Malley, who serves as CSX’s vice president for state government affairs in Florida, non-discrimination protections are critical for recruiting and retaining the best workers. That’s why CSX, which is headquartered in Jacksonville, already has corporate non-discrimination policies on the books. But sometimes those aren’t enough. The lack of statewide laws send a message to LGBT workers and family members that—regardless of workplace policies—when you leave the office, you are not protected. For many companies, the idea that inclusiveness and equality leads to corporate growth is not new—it’s a well-known fact that’s been giving them a leg up on the competition for years. In 1987 AT&T—which employs more than 14,000 Floridians—established the first LGBT employee resource group in corporate America. According to Joe York, AT&T Florida president, the company wouldn’t be as successful as it has been without this focus on inclusion and diversity.

“We believe that in order to remain competitive in today’s ever-changing technology industry, Florida must attract the most innovative and talented workforce. In order to do this, it is imperative that we protect the workforce from discrimination of any kind. We are proud to be a part of a coalition whose goal is to ensure all Floridians are treated equally.”

CSX, Tech Data Corp and AT&T are not outliers. LGBT non-discrimination policies have become a best practice in corporate America: A full 82 percent of Fortune 500s have explicit policies prohibiting discrimination on the basis of sexual orientation and gender identity.

Thanks to companies like these and their inclusive non-discrimination policies, Florida has one of the fastest growing economies in the country. It’s clear that if we want to keep our economy growing, these protections need to be applied statewide. If you’re a business owner or leader in the business community and you agree, click here to join the Florida Competes coalition.