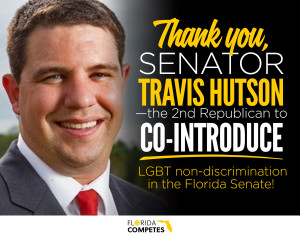 Senator Hutson explained why he’s standing with a bipartisan coalition of lawmakers and many of the states leading Fortune 500 companies in supporting the Competitive Workforce Act:

“I have always been a vocal supporter of this pro-business issue and believe there is a fundamental flaw in a society that condones the firing of someone simply because they are LGBT. I am pleased to join Sen. Latvala and my colleagues in the House to co-sponsor this very important piece of legislation. While there are some concerns I have for others to sue unjustifiably, I am confident that will be addressed through the committee process.”

This week kicked off the 2016 legislative session—marking the beginning of our 60 day window to advance the Competitive Workforce Act in 2016. And with growing bipartisan support, it’s clear that momentum has reached an all-time high.

Keep the momentum going by urging your lawmakers to support the Competitive Workforce Act. Just click here to get started.