At last night’s City Council meeting—the second public meeting since the HRO’s introduction this year—members voted 12-6 in favor of the HRO and shortly after, Republican Mayor Lenny Curry said he would let the bill become law. 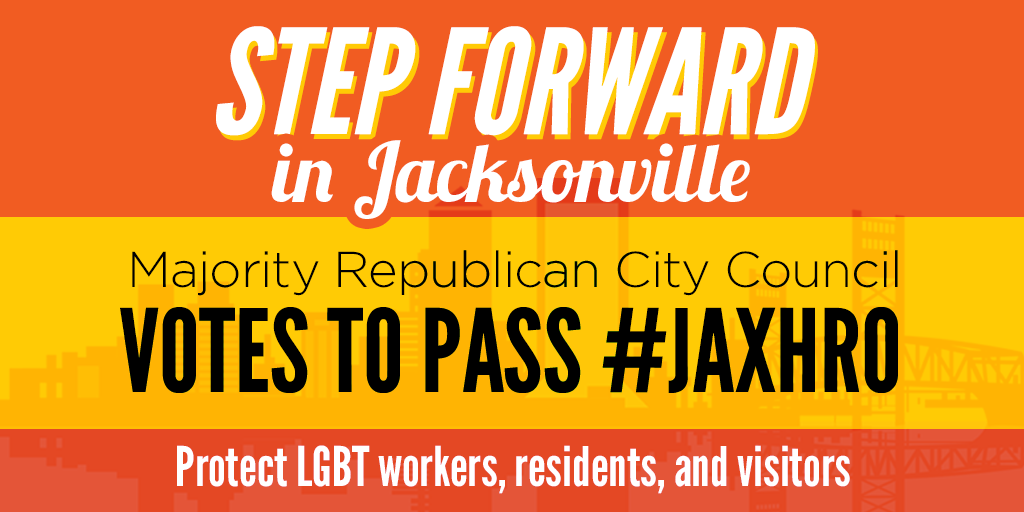 An impressive crowd packed City Hall to lend their voices in support of the ordinance. The first public meeting featured a similar record-breaking crowd and was convened over two days to accommodate the hundreds of local residents and business owners who wanted to give testimony.

This momentum was driven by the Jacksonville Coalition for Equality, a group of 700+ local businesses, 200+ local faith leaders, and area advocates who sent more than 60,000 messages of support to City Council members in the last month.

The Jacksonville Chamber was a strong proponent of the #JaxHRO as an important step to improving Jacksonville’s reputation and giving the city an economic advantage in attracting new business and investments. Last night, Chamber Chairman Darnell Smith lauded its passage, saying “[Jacksonville is now] open to everyone. This is the right decision for Jacksonville. Everyone who supports this as well as those who don’t will see we did the right thing tonight.”

The Coalition’s chair, Dan Merkan, noted that the HRO’s passage is not only significant for Jacksonville’s LGBT community, but sends a message of inclusion across the state and nation: “This is an historic moment for Jacksonville and for everyone who believes in equality under the law. For the first time, most people living in or visiting Jacksonville will be protected from discrimination based on their sexual orientation and gender identity. We hope that this measure will not only protect the LGBT community, but that it will be a sign to the rest of the country that Jacksonville is an open and welcoming place for everyone.”

“We hope that this measure will not only protect the LGBT community, but that it will be a sign to the rest of the country that Jacksonville is an open and welcoming place for everyone.” -JCE Chair Dan Merkan

Florida’s laws already protect people from discrimination things such as their race, religion, sex, and national origin. But without statewide LGBT non-discrimination protections, Florida’s reputation as an open and welcoming place to raise a family and start a business is in jeopardy. But because Florida still lacks statewide LGBT-inclusive protections, the state risks losing investments and top talent to the 28 states that already have these laws on the books.

This loss could be especially pronounced in businesses’ ability to hire competitively. Millennials—the future of Florida’s high-tech workforce—are shown to overwhelmingly support LGBT non-discrimination and to factor that into their assessment about where to live and work.

Lawmakers could remedy this problem by passing the Florida Competitive Workforce Act,  which was officially introduced this month for consideration during the 2017 session. If passed, the FCWA would protect anyone who lives or works in the Sunshine State from being discriminated against at work, in housing or in public places because of their sexual orientation or gender identity.