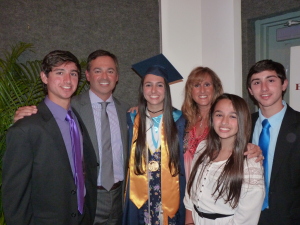 Jeanette cares deeply about passing the Florida Competitive Workforce Act , which would update non-discrimination laws to protect gay and transgender Floridians from discrimination.

“As the parent of a transgender youth, I care about this from the bottom of my heart, to the tips of my toes, to the top of my head,” Jeanette said.

At home and in school, Jazz’s parents have gone to great lengths to ensure her safety and well-being. However, outside of those two places, it’s still perfectly legal for someone to discriminate against Jazz because of her gender identity.

“We worry about her as she grows and heads out into the real world; we worry about that constantly,” Jeanette said about her and her family. Because Florida offers no statewide protections for people like Jazz, she could face discrimination when she’s looking for employment, or worse. Jeanette even worries her daughter might have to move out of Florida to thrive economically.

“This is who my daughter is, and who she’s always been, and she deserves to be treated equally, like my other children,” said Jeanette.

Jazz’s family has rallied around her and helped her along her journey at every step of the way. Jeanette recounted a story when Jazz was first realizing she was transgender, and her sister was unhappy that she would no longer be the “princess” of the family. But, after a few minutes, she realized that Jazz needed her support and declared, “I’m going to be the best big sister ever to her!”

Clearly, Jazz has an amazing family and lots of support, but Jeanette worries about transgender people — of every age — who aren’t so lucky.

For Jeanette, it’s all about fairness and treating people equally.

“This is a country where everyone is supposed to be treated equally, that’s promised in the Declaration of Independence and in the Constitution. My daughter was created equally — I know that — but right now, transgender people like her aren’t treated equally.”

Some Florida lawmakers are already working to change that. Earlier this year, the state legislature held its first-ever hearing on the FCWA. And in October, State Senator Anitere Flores (R-Miami) — who co-sponsored the FCWA in 2016 — indicated she would do the same in 2017.

Jazz has been a leader in helping other young transgender people, and has received many accolades for her advocacy, including being named to TIME Magazine’s list of the “25 Most Influential Teens of 2014.”