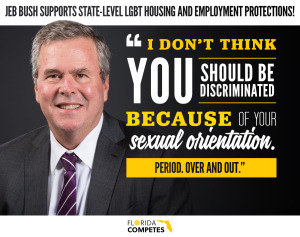 Bush was speaking at a recent campaign event when he was asked if he supported non-discrimination protections for gay and transgender people.

“I don’t think you should be discriminated because of your sexual orientation. Period. Over and out.”

Bush’s frank and straight-to-the-point answer is exactly how millions of Americans feel. Of course you should not be discriminated against because of who you are. It really is that simple.

With the 2016 presidential election now in full-swing, we can only hope that more presidential candidates will come out in support of a commonsense non-discrimination law. Bush has already weighed in on the issue. Now it’s time for more candidates to step up to the plate.