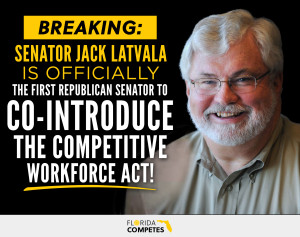 Big news from Tallahassee today: Senator Jack Latvala is officially the first Republican to co-introduce Florida’s Competitive Workforce Act—legislation that will strengthen Florida’s workforce by modernizing state law to prohibit discrimination on the basis of sexual orientation and gender identity.

Senator Latvala joins a growing number of lawmakers in both chambers—including lead House sponsor Holly Raschein, who is also a Republican—in championing this critical legislation, which is already backed by the state’s leading employers.

Our Campaign Manager Patrick Slevin thanked Senator Latvala for standing with the majority of Floridians and hundreds of businesses across the Sunshine State who know the Competitive Workforce Act will best enable Florida to attract and retain the top talent we need to remain competitive in the global economy:

“On behalf of the nine Fortune 500 companies, 27 major employers and more than 400 local businesses here in our state and part of the Florida Businesses for a Competitive Workforce coalition, we want to thank Senator Latvala for supporting this important and historic piece of legislation,” said Coalition Campaign Manager, Patrick Slevin. “Not only is this a pro-business issue facing our state and critical to its economic viability, it is the right thing to do. We hope this serves as an example for other Republican members to support this measure heading into the 2016 Legislative Session.”

This showing of bipartisan support is just the latest indicator of unprecedented momentum to pass comprehensive LGBT non-discrimination protections in 2016. In just one week from today, lawmakers return to Tallahassee for the 2016 session—click here to tell your elected officials that it’s time to end discrimination in Florida!