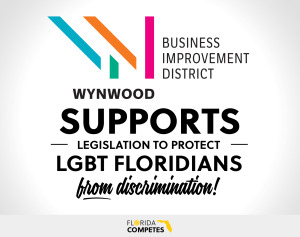 While it is illegal to discriminate in employment, housing and public accommodations based on race, color, religion, sex, national origin, age, handicap or marital status, the gay and transgender community is currently left out of statewide non-discrimination protections. For this reason, top employers are backing the Competitive Workforce Act, which will give the state a competitive advantage in today’s evolving marketplace.

“Wynwood is a place on the cutting edge of Miami’s arts and technology boom, so supporting this legislation is a no-brainer,” said Wynwood board co-chairman Albert Garcia. “If Florida wants to attract top talent, it needs to show that it is a pro-fairness state. Nobody should face the possibility of discrimination in employment, housing or public accommodation – period.”

Bradley Carlson, managing partner of Fortis Development Group, which is developing 250 Wynwood, a condo building near Panther Coffee, added to Garcia’s comments about why he supports the Florida Competitive Workforce Act, “We need strong anti-discrimination laws because people who might want to work here think about that. Some municipalities and cities have them, but the whole state is not covered.”

With the December 2014 passage of a Human Rights Ordinance, Miami-Dade County became the 28th municipality in Florida to offer fully inclusive protections. As a result, more than half of Floridians live in areas that offer protections for the LGBT community. However, it leaves inconsistencies for employers across the state as well as many Floridians vulnerable to discrimination.