A new study shows passing the Florida Competitive Workforce Act (FCWA) would have a significant positive impact on Florida’s economy.

The report from Thinkspot, Florida’s Competitiveness for Talent Supply: Projecting the Economic Impact of Tolerance, shows that non-discrimination legislation could boost Florida’s economic output by $5.46 billion over the next 10 years and could create 35,759 new jobs. Thinkspot is a Tallahassee-based firm that advises businesses on economic trends and policies. 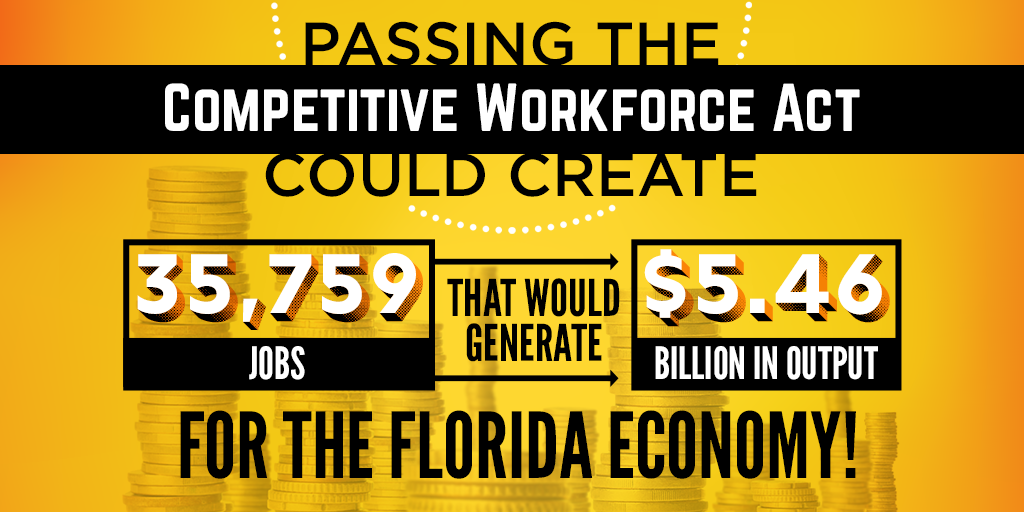 According to the report, these gains would come from increasing Floridians’ “personal freedom,” a fundamental indicator of a state’s ability to attract workers and drive economic growth. Florida could add more than $3.46 billion in economic output simply through expanding its educated and skilled workforce.

According to John Tonnison, Executive Vice President and CIO of Tech Data Corporation, and President of Florida Competes, competition is already fierce for top talent, and Florida should do everything in its power to remain competitive:

“Recently Florida was ranked first in the nation for higher education. The state is graduating some of the most talented students in the country and we need them to stay in Florida to boost the economy. Competition is fierce for these future leaders, who look for both an inclusive work environment and a high quality of life. Florida needs to follow the lead of Fortune 500 companies and add sexual orientation and gender identity to its anti-discrimination law.”

Florida currently ranks 6th among states in economic freedom, but 36th in personal freedom—a situation that reduces the collective bottom line in Florida by more than $362 million annually, mostly through lost productivity and turnover among workers.

Evidence is mounting that Florida needs the FCWA—and it’s becoming clear that Florida lawmakers are ready to move it forward.

Florida residents and business leaders are on board too. A 2013 Poll by the Bob Graham Center for Public Service also showed that 73% of Floridians support such legislation. And more than 450+ small businesses, 30 large businesses, and 10 Fortune 500 companies—including AT&T, CSX, and Tech Data—have come out in favor of the FCWA as members of Florida Competes.

Business support for the FCWA is growing by the day. If you’re a Florida business owner who thinks it’s past time for Florida to protect everyone from discrimination, click here to learn more about Florida Competes and sign our business pledge.