In a Powerful Editorial, the Orlando Sentinel Calls on Lawmakers to Act and Pass LGBT Protections

When 49 LGBT people were gunned down at Pulse nightclub, the eyes of the world turned towards Orlando.

Individuals and organizations across the country helped raise more than $7.5 million for the families of the victims.

But the Orlando Sentinel Editorial Board argues, “the Pulse massacre also highlighted a glaring and enduring injustice in Florida.”

That injustice: The lack of statewide LGBT non-discrimination protections. 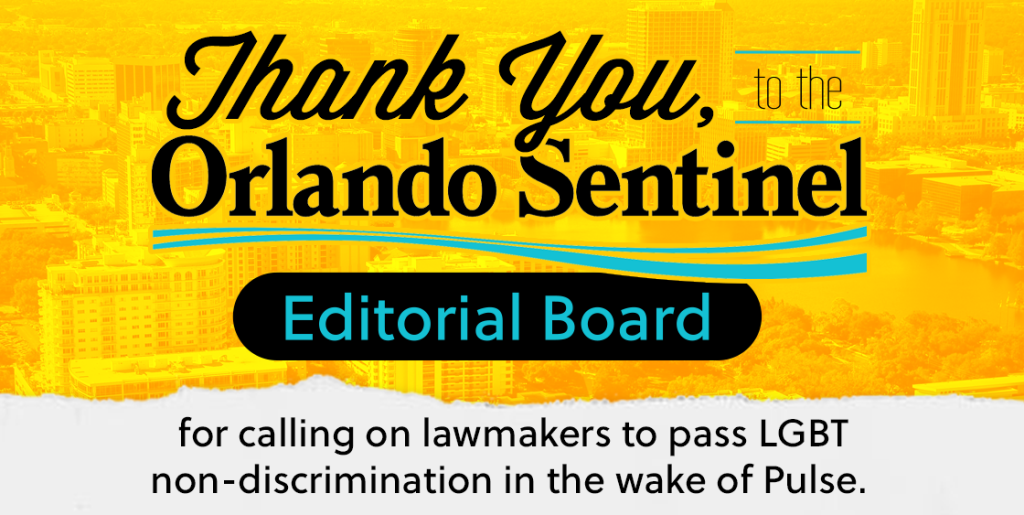 In a powerful editorial, the Orlando Sentinel is calling on Governor Rick Scott and the Republican dominated legislature to take action and pass LGBT non-discrimination, writing: “In 2014, during his re-election campaign, Scott declared, ‘I clearly don’t believe in any discrimination.’There would be no better way for him to prove it now than to endorse — publicly and enthusiastically — a statewide ban on LGBT discrimination.”

The editorial board hails the more than 20 Republican elected officials from Orange County who signed a resolution in support of LGBT non-discrimination laws.

The resolution was spearheaded by Mayor Teresa Jacobs who said it’s the product of conversations she had with families of the Pulse victims: “I gave them my word I would do everything I could to make sure … that their lives and their love changes something for the better.”

The editorial board says state lawmakers should follow the lead of these Orange County elected officials and advance LGBT non-discrimination legislation—specifically referencing the Florida Competitive Workforce Act, which received its first-ever hearing earlier this year and would outlaw discrimination in employment, housing, and public places.