A Win For Anti-Discrimination in Osceola 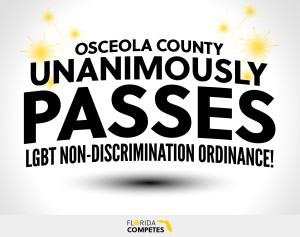 There is more good news and momentum today for the fight to protect all Floridians – including LGBT people – from discrimination.

It’s another important victory in the effort to ensure that no one in Florida has to live in fear of losing their home, their job or their safety simply because of who they are or whom they love.

While we welcome this progress, it also only increases the need for a complete, statewide policy on this critical issue.

Florida Businesses for a Competitive Workforce campaign manager Patrick Slevin had this to say about the need for statewide action:

“The time is now for the Sunshine State to pass statewide legislation so all LGBT Floridians are protected, which is why 34 large employers and more than 400 local businesses have signed onto a petition supporting the Florida Competitive Workforce Act.”

While 55% of Floridians now live in an area with these protections, leaving a patchwork of inconsistent protections that creates confusion for people and businesses alike. Imagine knowing that you’re protected from discrimination where you work, but not on your drive home, or in the community where you and your family live.

The solution to this problem is the Florida Competitive Workforce Act.