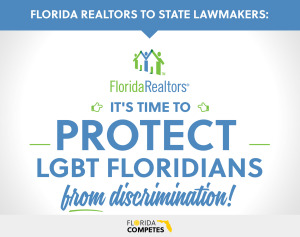 Today, Florida Realtors announced its endorsement of the Competitive Workforce Act—legislation that would update the state’s discrimination protections to include gay and transgender people in regards to employment, housing and public accommodations.

Florida Realtors, the largest trade association in Florida with over 140,000 members, believes that passing this legislation will give the state a competitive advantage in today’s progressing marketplace. Today, they join some of Florida’s largest employers—from Wells Fargo to Disney—in speaking out in support of this common sense, much-needed legislation.

“Florida Realtors is pleased to support any public policy measure that promotes fair housing and helping Floridians achieve the dream of homeownership,” said Florida Realtors President Andrew Barbar. “In a recent survey, more than half of our members who responded agreed the association should support legislation that would prohibit discrimination based on sexual orientation and gender identity. After reviewing the survey results and hearing from our internal Diversity Committee, the Board of Directors voted to support legislation that would prevent discrimination based on sexual orientation and gender identity.”

David Hall, chair of Florida Realtors’ Diversity Committee, added that the state association’s endorsement aligns with that seen at the national level. “The National Association of Realtors recently amended the Realtor Code of Ethics to include sexual orientation and gender identity among its fair housing protections. This legislation has the strong backing of Florida Realtors who continue to promote fair-housing laws and property rights.”

Florida currently does not have consistent statewide housing protections for gay and transgender people, although 28 municipalities protect more than half of the residents from discrimination. Nationwide, 18 states and Washington, DC offer protections, and three additional states provide protections for only gay people.

We’re grateful to the Florida Realtors for speaking out on behalf of gay and transgender Floridians. Their endorsement couldn’t have come at a more critical time as lawmakers return to Tallahassee for the 2015 legislative session on Tuesday.

CLICK HERE to urge your lawmakers to support the Competitive Workforce Act.