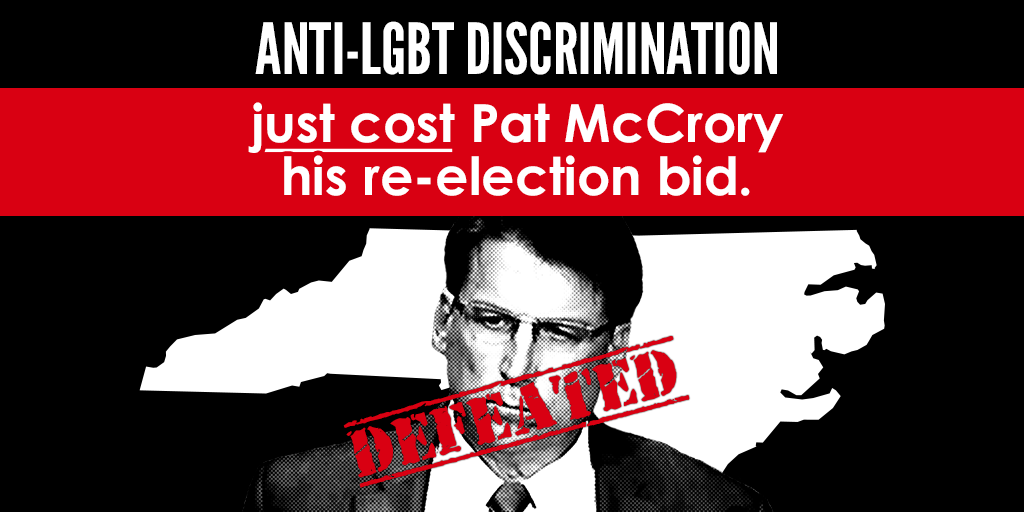 Despite a strong Republican sweep in the House, Senate and presidential races, the gubernatorial race was hotly contested, defined in large part by the candidates’ opposing views on the state’s HB 2 law.

HB 2 is the product of a costly special session and less than 48 hours of deliberation. After being rammed through the legislature as part of efforts to repeal LGBT protections in the city of Charlotte just days before they went into effect, McCrory signed the bill into law less than 12 hours later.

HB 2 quickly gained notoriety as the most egregiously anti-LGBT law in the country. It’s the first-ever law that explicitly targets transgender people for discrimination by banning them from using public restrooms. HB 2 also prohibits local ordinances that protect LGBT people from discrimination in housing, employment, and public places like restaurants, shopping malls, and doctors offices.

The law was met by swift and steady backlash from advocates and business leaders alike. As of today, the law has cost North Carolina thousands of jobs and $600 million and counting in frozen investments, diverted tourism revenue, and cancelled events.

Despite mounting economic wreckage left in the wake of HB 2, McCrory maintained defiant defense of the law, making it a cornerstone of his reelection campaign.

On Election Day, North Carolina voters broke across party lines to send a clear signal: Discrimination is a losing platform.

Lawmakers here in Florida should heed the warning out of North Carolina—and take concrete steps to ensure our state is economically competitive, and open for business for all by passing LGBT non-discrimination protections.

We know now that inclusive non-discrimination laws are the bedrock of a strong economy. We saw proof of that when the ACC awarded Orlando—a city with LGBT protections—the host-bid for its cash cow football championship after it pulled the game from North Carolina in boycott to HB 2.

That one game alone is expected to rake in tens of thousands of dollars for the city of Orlando in just one weekend.

These are the types of investments Florida needs to attract to create jobs and grow our economy.