Rev. Tim Sizemore’s deep southern accent reflects his Alabama roots. Tall, clean cut and blonde, with a wife and three kids, he fits the image of a white Southern Baptist preacher, living in the conservative central Florida town of Lakeland. He may not be someone the average person would look at and think, “that guy cares about LGBT rights.” Yet he cares deeply, and has become a vocal ally to the LGBT community. 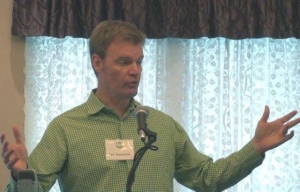 Rev. Sizemore was born and raised in what he describes as “conservative fundamentalist evangelical churches” in Alabama. His college and seminary experiences were similarly conservative. And as a young minister he pastored several Baptist congregations in the South.

“On the subject of sexuality, sexual orientation, marriage, family I just operated on the assumption that what I had heard in my upbringing was consistent with reality,” he said.

“I began to encounter people in counseling and in pastoral relationships,” he said. “They would tell me their stories and it seemed that those stories were incompatible with the simple explanations I had heard in my upbringing and theological training.”

In one instance, a woman, who lived near the church he was pastoring, would come into the sanctuary periodically to pray. He often saw her crying.

“One day she shared her story with me,” he said. “As far back as she could remember, she had been attracted to people of the same gender, and she never remembered a time that she had chosen that, but that’s just who she was.”

So began his journey toward reconciling his faith with acceptance of LGBT people.

“In every congregation I’ve served in, no matter where it was on the spectrum – conservative to liberal – there have always been people who identified as lesbian, gay, or bisexual,” Rev. Tim Sizemore said. “Initially I didn’t know where to put that. I tried to fit it into the framework I grew up with, that they had just chosen to live contrary to what the bible affirmed. But it just didn’t fit with what I saw when I got to know these people. They caused me to rethink things.”

He started reading and researching about sexual orientation.

“I changed my view. And I began talking about it with my colleagues – first as a Southern Baptist – and telling them that I think we’re getting this wrong, and what we should be focusing on is how to help people live healthy lives and have healthy relationships consistent with their unique sexual orientations.”

But he found his fellow Southern Baptists unwilling to have those conversations.

Eight years ago, Rev. Sizemore moved to Lakeland, Forida to pastor a different kind of Baptist church – one that was affiliated with the more moderate Cooperative Baptist Fellowship (CBF), the group that split off from the Southern Baptist Convention in 1991 over theological differences, including the question of whether women should serve as ministers.

When Rev. Tim Sizemore interviewed for the position, he made it clear that he supported LGBT people, and luckily, that’s something that the congregation was looking for. As a denomination, CBF remains politically moderate, but individual congregations and leaders seem to be moving toward more progressive and inclusive views on sexuality and gender indentity.

“Unfortunately, the national organization adopted a hiring policy that excludes LGBT people as an attempt to mollify some of the more conservative churches in CBF,” he explained. “My sense is that the younger generation of CBF leaders is much more open, and that the future CBF is probably going to move in the direction of full support and inclusion in the future. The hiring policy seems really out of sync with the kinds of organization that CBF has been in the past and the kinds of stands that it has taken.”

In recent years, Rev. Tim Sizemore has become active in the local PFLAG group, and has spoken out through op-eds in the local paper and news interviews in support of LGBT spiritual and legal equality. His voice is part of a growing conversation in evangelical circles about the need for the church to embrace LGBT people of faith and the dangers of using Christianity to condemn LGBT people.

“It’s been a journey that’s taken me about 20 years,” he said. “I’ve become not only someone who accepts and affirms LGBT people “I’m active in that community to promote marriage equality and their full affirmation in the church.”

Now that marriage equality has come to Florida, Rev. Tim Sizemore and his congregation plan to open their church to same-sex couples for weddings. And he plans to continue spreading his message that evangelicals need to make affirming spaces for LGBT people of faith in the church, even if that means interrogating and rethinking long-held theological convictions.

“The biggest way to advance the cause is for more and more people to get to know LGBT people, whether that’s family members or friends or people in the community – just meeting them and realizing they’re just regular people,” he said. “They’re not a threat to marriage or society. They’re just like anyone else and God loves them just the same.”