Orlando Sentinel: Florida’s leaders should stop paddling against the current of history 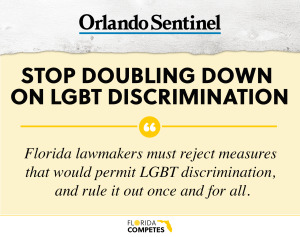 The Orlando Sentinel penned  a powerful editorial saying that it is vital for legislators to consider their constituents’ opinions on non-discrimination legislation. Currently, a hearing on the Competitive Workforce Act—legislation prohibiting discrimination against LGBT Floridians— has not been scheduled, yet the legislative session is adjourning soon, meaning the bill would die before even being considered in the House or Senate.

Floridians’ perspectives on non-discrimination have changed drastically in recent years. The editorial states, “In 2008, 62 percent of state voters approved an amendment to the constitution to ban same-sex marriage. By last year, a Quinnipiac University poll found 56 percent of Floridians supported gay marriage. Meanwhile, the ban was ruled unconstitutional by state and federal judges.”

Despite this cultural change, many of Tallahassee’s leaders have not listened to their constituents as state lawmakers have yet to even schedule a public hearing on legislation supported by a supermajority of Floridians.

“Barring a last-minute change of heart among House or Senate committee chairs, a bill banning discrimination in Florida based on sexual orientation or gender identity will die without even getting a hearing in either chamber. In burying the bill, known as the Competitive Workforce Act, the Legislature’s supposedly pro-business Republican leaders have rebuffed requests from a coalition representing 30 major employers and more than 300 local businesses.”

The coalition, Florida Businesses for a Competitive Workforce, includes major Florida employers  such as Disney, CSX, Darden, Wells Fargo and Marriott. All 30 members of the coalition wrote a letter to Florida legislators and Governor Rick Scott saying that passing non-discrimination legislation would help attract more tourism as well as bring and keep top talent in the workforce. The Sentinel said, “It’s also the will of the majority: A 2013 poll commissioned by the coalition for 63 percent of Floridians would ban LGBT discrimination.”

The Sentinel continues by stating that although 28 counties and municipalities in the state passed local ordinances banning discrimination, nearly half of Floridians live in areas that do not protect gay and transgender people.

If anything, discrimination could become more severe in the Sunshine State. House committees have now approved measures allowing adoption agencies to reject same-sex couples, and have threatened to fine or arrest transgender Floridians for using the “wrong” public bathroom. “Sponsors and supporters of those measures would double down on discrimination.”

The good news is that so far the Senate has not agreed with the House on this outlandish legislation, which if passed could turn Florida into the next Indiana.

Indiana Governor Mike Pence signed into law the state’s Religious Freedom Restoration Act (RFRA) on March 26, allowing businesses and individuals to discriminate against gay and transgender Hoosiers under the guise of religion. After its signing, major companies and organizations in the state spoke out against the legislation, some threatening to leave the state, jeopardizing millions of dollars in revenue and thousands of jobs. Because of this backlash, the legislature reworked the bill so as not to undermine existing non-discrimination laws protecting gay and transgender people in some of Indiana’s counties and municipalities.

The Sentinel ended with a bold statement against discrimination: “Florida’s leaders should stop paddling against the current of history. As the coalition said in its letter to lawmakers, ‘The time is now for Florida to roll out the welcome mat to everyone who wants to work, live and play here.’”

Discrimination does not belong in such a tourism-driven, well-known state as Florida. Urge your lawmakers to consider the Competitive Workforce Act before it’s too late!