As the 2018 Florida legislative session drew to a close this month, the legislature again failed to advance the Florida Competitive Workforce Act (FCWA) in either chamber, despite record-breaking and overwhelming support. 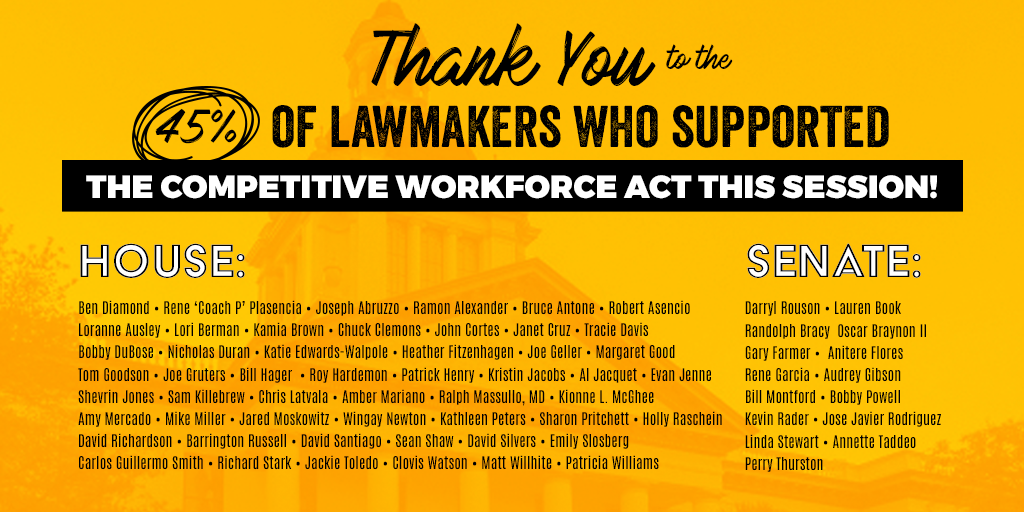 The FCWA (known officially as HB 347 and SB 66) would update Florida’s civil rights laws to protect LGBT people from discrimination in employment, housing and public accommodations—an important step in retaining and attracting business and talent to the Sunshine State.

The FCWA was reintroduced this January, and within nine days already had the signatures of 62 legislators. Ultimately, it would garner the support of 69 legislators, or 45% of Florida’s entire legislative body. A record breaking number of GOP sponsors and cosponsors signed on to each piece of legislation. Ultimately, 57% of those who signed on were freshmen members.

Lawmakers talked a good game about fairness this session — about how everyone should be treated equally, fairly, respectfully, and be able to live without fear of harassment or intimidation. However, it turned out to be just that — talk, with no results. Reforms have been promised for years in civil rights law, but as of yet, those promises remain empty.

Failure to pass the FCWA also hurts Florida from a business standpoint. When we don’t appear “open to all,” we stand the chance of losing out on lucrative economic investments and profits. Already, 450 small businesses, 10 Fortune 500 companies, and more than 30 large employers all based in Florida have sent a letter urging the House and Senate leadership urging them to pass this legislation. The letter stated, in part:

“The coalition believes the Florida Competitive Workforce Act will make the State of Florida more competitive in the national and global marketplace in much the same way anti-discrimination policies have benefited employers.”

This could also affect the looming decision from Amazon as to the location of its second world headquarters. Amazon is on record saying they will not build in a state that is not fully inclusive and does not support the company’s tenets of inclusion, diversity, and fairness. Florida is the third largest state in the nation, but continues to need to gain national business credibility. To fail in such a bid (which would be an initial $5 billion investment and create 50,000 new jobs) simply because of a lack of updated civil rights law would be shameful, and a huge loss for the state.

The bottom line is this: discrimination hurts the bottom line, period. Without comprehensive protections for all, Florida will continue to be one step behind in attracting new business and creating new opportunities. It is long past time for this update to be made to Florida’s existing civil rights law, and yet again, the time has come and gone to make the positive change that will benefit all people who live in the Sunshine State.

Florida Competes thanks the Representatives and Senators who signed on to both pieces of nondiscrimination legislation this session, as well as the hundreds of businesses and employers who have joined our coalition.