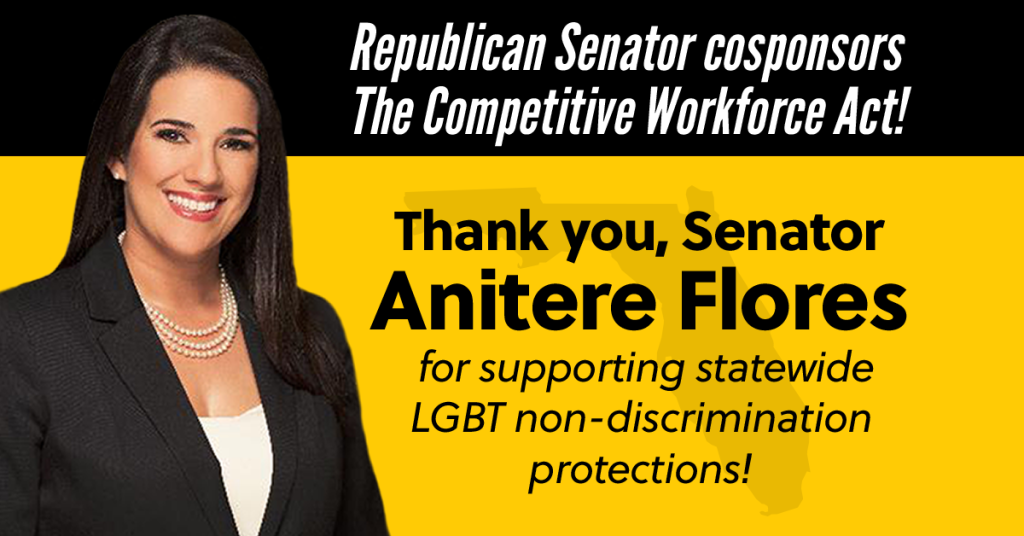 State Senator Anitere Flores (R-Miami) signaled today that she would co-sponsor the Florida Competitive Workforce Act (FCWA), which would amend Florida’s civil rights laws to prohibit discrimination based on sexual orientation and gender identity or expression in employment, housing and public accommodations.

In affirming her support for the legislation, Senator Flores noted that not only is protecting LGBT people from discrimination simply the right thing to do, local protections have only helped—not hurt—two communities that she represents.

Bipartisan support FCWA has been growing since it was first introduced in the Florida legislature seven years ago. Last year the FCWA failed to break the 5-5 tie vote to pass out of the Senate Judiciary Committee, but with growing bipartisan momentum, chances are better than ever that the bill will succeed next legislative session.

And in August, Orange County Mayor Teresa Jacobs and more than 20 other local GOP elected officials signed a resolution supporting legislation. Jacobs said she was inspired to support the bill by the Pulse Nightclub shooting.

Lawmakers have also been inspired by the fallout from North Carolina’s discriminatory HB 2, a law similar to anti-LGBT bills that Florida and other states rejected last session. The economic boycott of North Carolina by multiple businesses and tourism organizations—including the NBA, NCAA and ACC, which have all pulled major championships—is expected to cost North Carolina more than $395 million in revenue.

Late last month, the ACC announced it would bring its football championship to Orlando because of the city’s local LGBT-inclusive non-discrimination law. If lawmakers pass the FCWA next session, the entire Sunshine State could be reaping these economic rewards.