When we started to brainstorm local businesses who would publicly support the Florida Competitive Workforce Act, Abigail StClair was one of the first people we thought of. Abigail took that as a big compliment.

“We’re a smaller, locally-owned, family-owned business, and we’re excited to help in any way we can,” Abigail said. 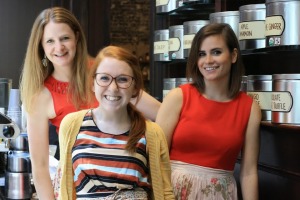 TeBella Tea Company employs over 20 employees between 4 locations in Tampa Bay and Sarasota. In business for eight years, the company offers more than 115 teas at their flagship location on Davis Islands and more than 45 at the other three locations and that’s not the only kind of diversity that Abigail welcomes.

“For us, when we’re hiring, we’re looking at your attitude, your work ethic, the whole employee; we’re not looking at whether you’re LGBT,” she said.

Abigail doesn’t tolerate any discrimination in her business, and said she understands why it’s important to have a law guaranteeing that safety in all businesses. Right now some cities in Florida offer local non-discrimination protections that ensure LGBT employees can’t be fired and LGBT customers can’t be turned away. But many don’t, and that leaves a confusing regulatory situation for businesses looking to expand — and puts employees looking to get hired at risk for being discriminated against.

“Especially if you were moving to Florida for a new job, imagine not having those protections. Everyone in Florida should be guaranteed that they won’t be fired from their job for reasons that have nothing to do with their performance,” Abigail said.

The FCWA would fix this situation by amending Florida’s civil rights laws to prohibit discrimination based on sexual orientation and gender identity or expression in employment, housing and public accommodations. And many small businesses like Abigail’s are already on board.

Lawmakers have listened these concerns from businesses and members of the community, and are fully on board. During the 2019 legislative, the FCWA hit a record number of cosponsors: 73. Unfortunately, legislative leaders have refused to advance it.

Momentum is clearly catching, but Abigail says there’s still a lot to do. Abigail says the most important thing that supporters of the Florida Competitive Workforce Act could do is help spread the word that this law is needed because right now there are no non-discrimination protections for LGBT people.

“People are really surprised to hear that right now it’s perfectly legal to refuse someone a hotel room, or an apartment, because they’re gay or transgender,” she said. “Especially in Florida, where hospitality is such a big part of our economy, it’s hard to imagine for some people, but it’s true. So, I think it’s critical that people know this really can happen right now, that’s why we need this law.”

For more information on TeBella Tea Company, check out their website.