Today, businesses large and small across Texas are celebrating the end of a bruising special legislative session that saw the introduction of 5 anti-LGBT, anti-business bills—none of which passed, thanks to unprecedented engagement from  business owners, CEOs, and chambers of commerce. 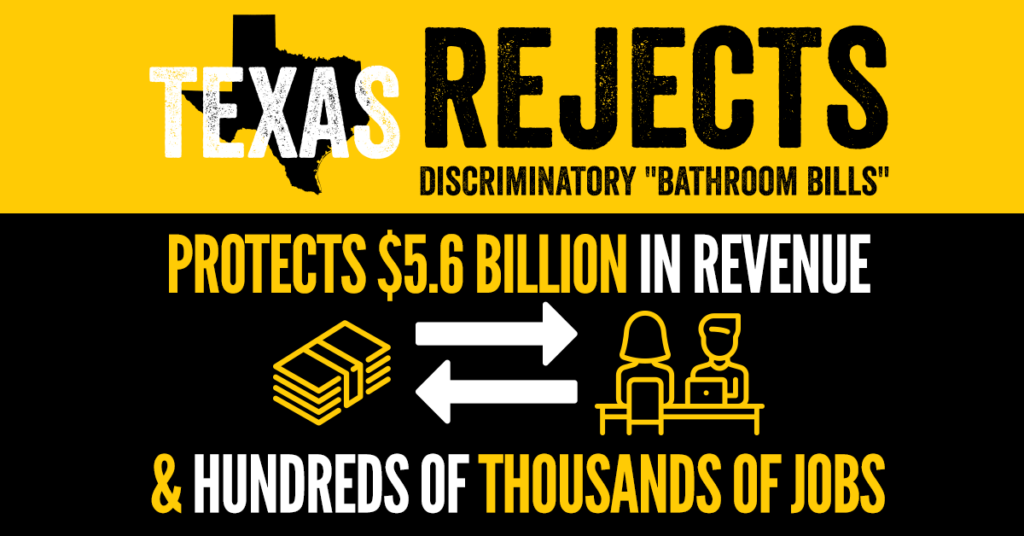 Legislation targeting LGBT people for discrimination has been an economic disaster in every state that’s tried it. Most infamously we saw this last year with North Carolina’s HB 2, which immediately cost the state nearly $600 million in lost revenue and investments, hundreds of thousands of jobs, and led to countless cancelled events.

Texas was looking at a similar economic disaster. Earlier in the legislative session, an economic impact study from AngelouEconomics and the Texas Association of Business (PDF download) warned that passing any discriminatory bills could cost the state up to $5.6 billion in investment losses over the next decade.

Another coalition of businesses, organizations and tourism industry leaders, Texas Welcomes All, noted that as these bills were being debated, conventions totaling at least $66 million in revenue pre-emptively canceled in Austin, Fort Worth, Houston, San Antonio, Dallas, and Arlington because of the mere threat of discriminatory legislation. Another group of conventions that bring in about $205 million in revenue pledged to also cancel if any such bills became law.

This devastating economic and potential brand damage is why, by the end of the special session, more than 1,350 businesses—including 51 Fortune 500 companies and more than 1,000 small businesses—had joined Texas Competes, a coalition dedicated to promoting the business case for LGBT-inclusion.

Yesterday, Texans proved that discrimination is bad for business, it’s bad for workers, and it’s bad for families. LGBT-inclusion is central to a vibrant business climate. And businesses have a central role to play in advancing that case in state legislatures nationwide.

We’ll be taking these lessons to heart as we continue to push for the Florida Competitive Workforce Act (FCWA), which would ensure all hardworking LGBT Floridians are protected under state law from discrimination in employment, housing and public accommodations. Last year, a record 70 lawmakers came out in support of the FCWA—a number we’ll be working hard to grow in the weeks and months ahead as the legislative landscape for 2018 takes shape.