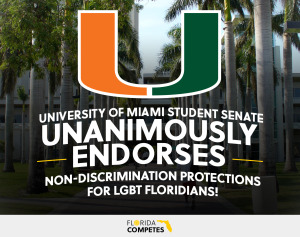 On April 9, the University of Miami Student Government Senate passed a resolution endorsing the Florida Competitive Workforce Act (FWCA), legislation that would update Florida’s state law to prohibit discrimination against gay and transgender Floridians in employment, housing and public accommodations.

The resolution passed with a resounding vote of 35-0. The Florida Competes fellows and the student government senators also partnered to send a “call to action” letter to student governments at colleges all across the state encouraging them to pass similar resolutions in support of the FCWA.

The letter states, “Consistently, students are left out of official political conversations; we cannot afford to let that happen this time around.  Now is the time for us ALL to step up.  Now is the critical moment to ensure that ALL of Florida’s 19.5 million residents are protected from workplace discrimination.”

The FCWA has yet to be considered in the Florida House or Senate, despite overwhelming statewide support and a coalition of 30 of Florida’s top employers advocating for this commonsense, pro-business legislation.

Thank you, University of Miami Student Government Senate, for both passing this resolution in favor of fairness for gay and transgender people and for encouraging others to do the same!

You can help this movement, too. Email your legislators now encouraging them to consider this legislation, because discrimination should not be welcome in Florida!